How to Design a March Madness Contest for a larger team (>500)? 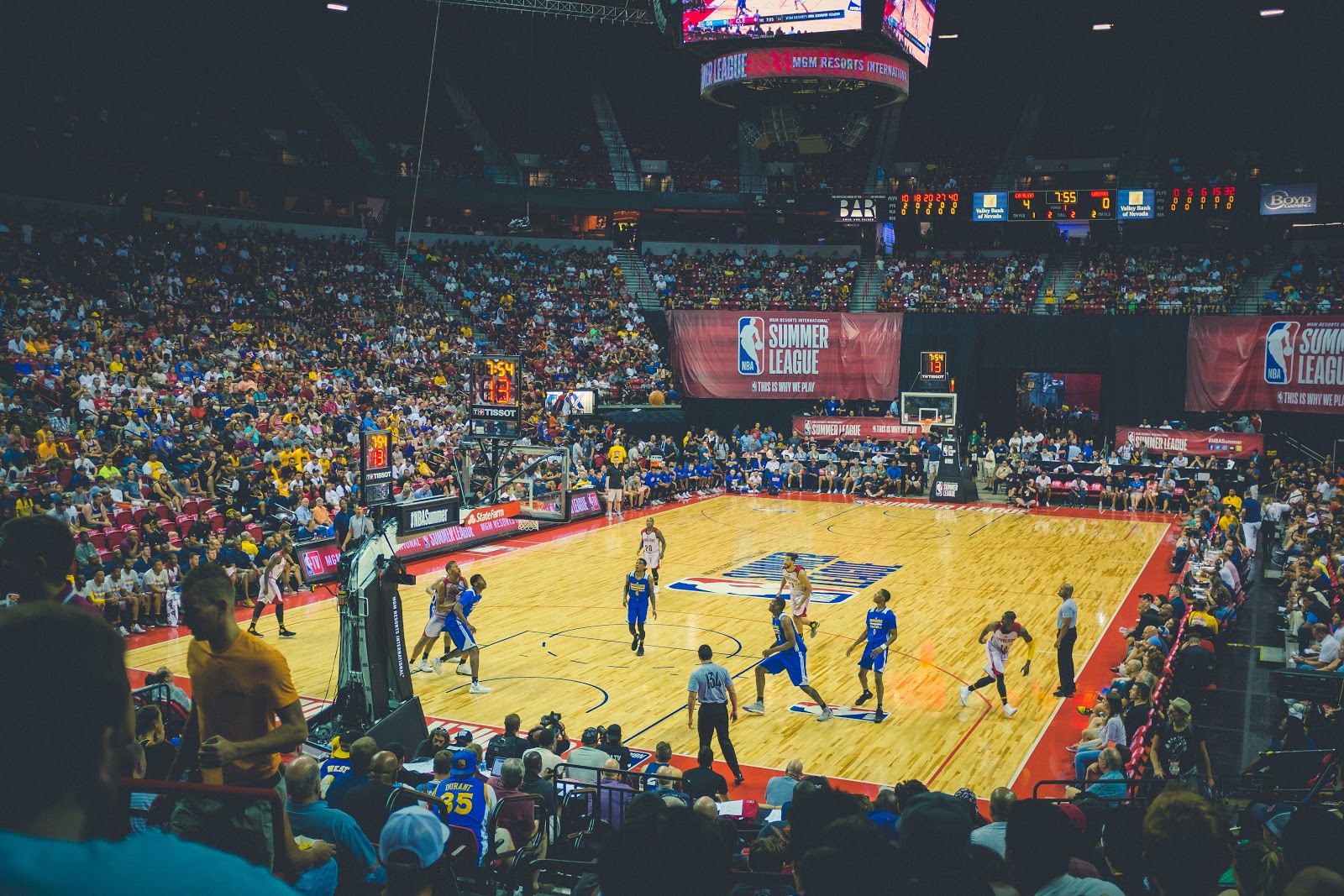 Looking for ways to:

Employee motivation is the key to achieve all these objectives

The secret to effective sales motivation is to associate key sales activities with a real-world event that already has a lot of buzz around it. Like, the NCCA Basketball Tournament.

In this blog, we are going to explain a step-by-step procedure of setting up the march madness sales tournament for a larger sales team (>500 sales reps).

If you have a smaller team with less than 100 people, click here to know more about how to setup March Madness for them

A clear-cut, definite goal lays the foundation to build a great contest. As a first step, sit with your team of decision-makers and decide what is it that you want to achieve through this contest.

Your goal must be clearly mentioned in your contest design plan. This makes the agenda clear to everyone, right from the management to the employee.

For our contest here, we want to double up the quarterly revenue.

So we define the goal as: “Increase the revenue 2X by the end of the quarter”

Next, choose the KPIs that you want to measure in the contest. It’s important to choose the right KPIs for your contest. Because these KPIs determine the rules and the ultimate result of your contest.

Here’s what to keep in mind while choosing the contest KPIs:

Since our objective for this contest is to double up the quarterly revenue, we choose the following KPIS:

To create March Madness teams, you need to divide your entire salesforce into different teams. You can do this division on the basis of: * Business units

For this contest, let’s consider a salesforce of about 800 sales reps and see how the division is done.

Divide the 800 sales reps into 16 teams with each team consisting of 50 reps. Make sure that you equally distribute the talent amongst these 16 teams. Meaning there should be an equal distribution of top-performers, middle performers, and bottom performers in all the 16 teams.

Name these teams according to your preference. We give the following names to our 16 teams:

For more creative sales team names, check out our blogs:

Seeding is one of the most important steps in the March Madness campaign.

For instance, since we have chosen “Revenue” as the KPI here, we need to see what is the total amount of revenue earned by each team in the last quarter.

Ranking: Rank the teams in the following way based on their past performance:

Regions: Next, divide these 16 ranked teams into 4 regions. You can name the regions according to your preference. We are naming them as:

Step 5: Matchup teams for the challenge

Now, it’s time to create matchups. Determine which team competes against which one. You need to match up the teams based on their seeding in their respective region.

Note: Usually, in march madness, we get to see the matchups made between a higher-seeded team and a lower-seeded team in a region. But this kind of matchup would be unfair for a sales competition. Because the top-most team would easily defeat the bottom-most team.

To keep the competition fair, pit a team with another team that comes immediately next to it in a region.

Let’s understand how to do a matchup like this in one region. And then the same can be applied for creating matchups in the rest of 3 regions.

So, we have 4 teams in a region, ranked from 1 through 4. Now pit the first team in the region with the second team (Team 1 vs Team 2). Next pit the third team versus the fourth team (Team 3 vs Teams 4). Here is how the matchups are going to look in a region:

Follow this process to create matchups in all the 4 regions 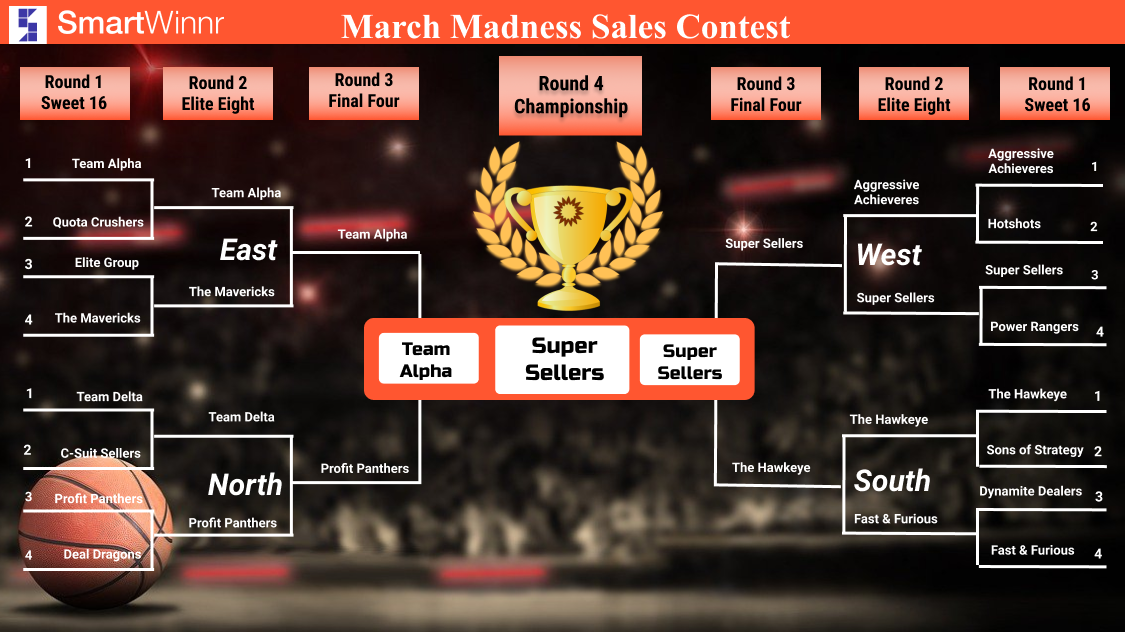 Now that your teams are set up for the challenges, it’s time to create a competition around these challenges. Here is a contest format that you can follow:

Contest Format: This is a single-elimination contest which means that there is going to be the elimination of teams in every round

In this round, all the 16 teams from all 4 regions participate.

How does this round work? Set a revenue target for each team based on their past performance. For instance, if the total amount of revenue generated by a team in the last quarter is $5000 then set a target of $7000 for them. If another team has made $10000 in the last quarter, then their target should be $14000.

Encourage all the teams to try and reach their respective targets as quickly as they can.

Winners: The teams that achieve their targets before their opponents, win this round and proceed to the next round.

After sweet 16, 8 participants will be left to play in this round. These participants compete to reach the final four.

How does this round work? Within 15 days, the participants have to win a single largest transaction over their matchups.

Winners: The teams with the largest transaction over their matchups, by the end of 15 days, win this round

This is the round where 4 teams from all 4 regions participate. From here only two of them get to go to the final round.

How does this round work? In this round, assign the teams with some specific regions/ territories where your sales is lagging and you want to improve. The sales teams need to try to sell and earn as much revenue as they can from these regions.

Winner: The teams that succeed in earning more amount of revenue over their matchups, win this round, and go to the final round.

This is the final round where the ultimate championship happens between the two finalists.

How does this round work? Make this round challenging by setting a very high revenue target for the finalists to achieve. The two finalists fight to meet or exceed this target first.

Winner: The team that outperforms the other team and meets the target first wins the championship. 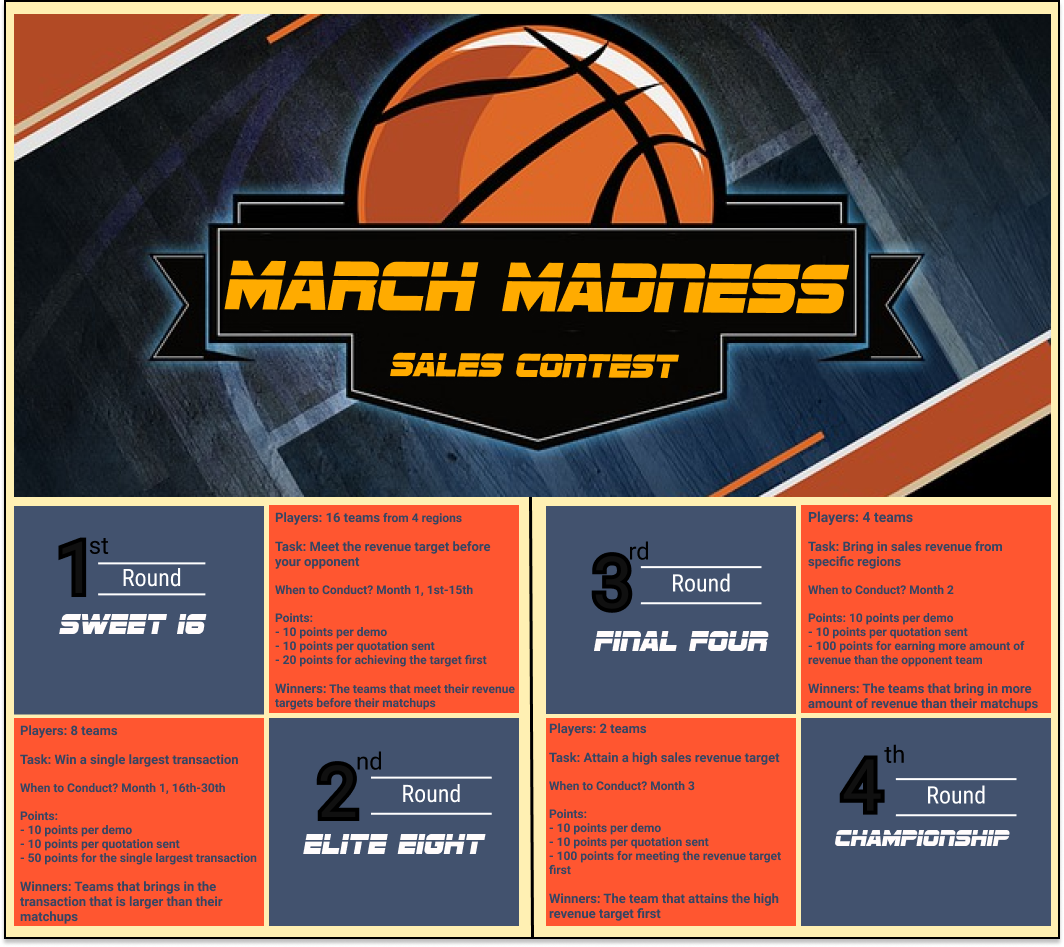 Here are some creative awards that you can present to the winners of this march madness contest:

Looking for more such creative employee award and incentive ideas? Get them from our blogs:

How to Engage the Eliminated Teams?

Run parallel brackets for the teams that get eliminated in the initial rounds. Seed these teams based on their performance and scoring in this contest. Then parallelly organize another march madness contest for them. This ensures that:

This also helps you to reach your business objective more quickly and efficiently.

Why do you need a sales contest software to run March Madness?

Automate the process of running march madness with the help of SmartWinnr’s gamified platform. No tedious excel calculations, real-time leaderboards, mobile app, notifications, and many more.

Interested to learn more about running your march madness contest through SmartWinnr? Book a demo with us today!