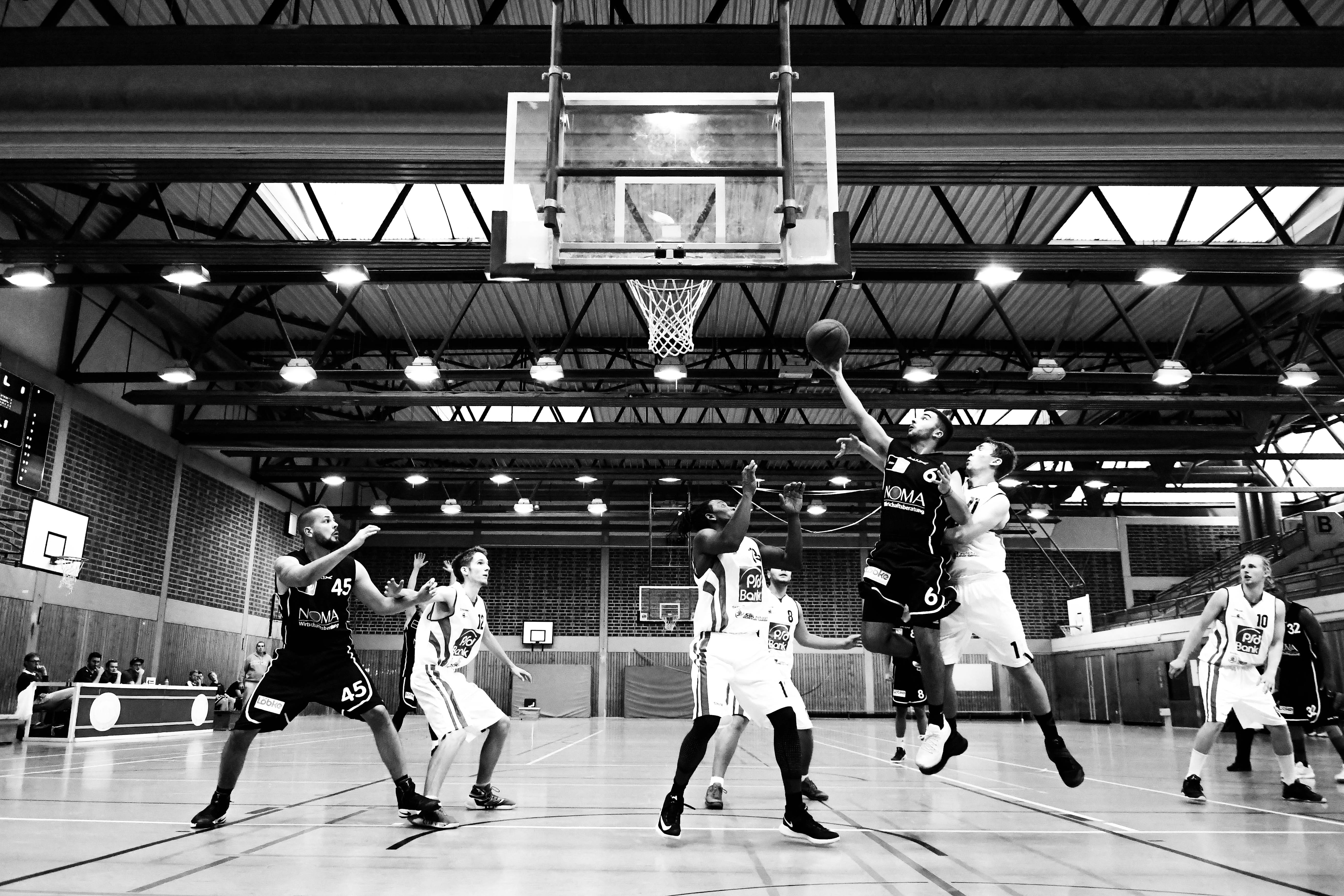 Can you believe its already March? As we have entered March 2020, right now, do you know what is

With Brackets, Bubbles, Upsets, Cinderellas, and Office Pools this marks as the craziest month for the basketball lovers. You can bring in this sports tourney spirit to your workplace by running March-madness styled sales contest.

How to Run a March Madness Contest?

There are two ways to run March Madness for Sales. One with teams. Another with individual reps. Here are quick walkthroughs that show how to do each below.

Are you looking for a ready-made Sales Contest Template? Click here to design your own template for free, in just 3 clicks.

Step 1- Choose KPI’s for the Challenge

The first step is to choose your KPI’s. What is it that you want to measure? And, what would be your version of points?

You could choose calls, deals, meetings booked, revenue, etc. This lays the foundation for building your challenge.

For example, if you have chosen “revenue” as the KPI for the march madness contest then measure how much revenue each of your rep has brought in the past. Now according to this, if you have 68 reps (We considered 68 as it is the official number of teams in march madness. You can apply seeding according to your team size) rank them from 1 to 68. The ranks are assigned in such a way that the best performing rep will get number 1, the next best will get the number 2 and so on until 68.

Divide these 68 reps into 4 regions– East, West, South, and Mid-west. Each region should have 16 reps. This division has to be done in such a way that the talent is equally distributed amongst all the four regions. So, here is what you can do– take the top 4 reps from the group of 68 reps and place each one of them in each of the four regions and rank them all number 1 in their region. Then, the next 4 best reps will be distributed in the 4 regions and they will all be ranked number 2 in their region. Continue this process until all the 68 reps are successfully placed in 4 regions. 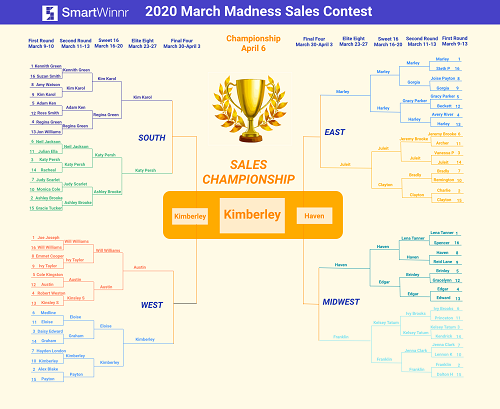 Step 3 - Create Matchups for the Challenges

To set up the challenge, you need to match-up your reps based on their seedings. Let’s understand how to create matchups for one region and the same can be applied for creating matchups in the rest 3 regions. So, you have 16 reps in a region ranked from 1 through 16. Now, pit the top rep in the region with the bottom rep (No. 1 vs No. 16). Then the next highest vs. the next lowest (No. 2 vs. No. 15), and so on. This is how the matchup looks like for all the 16 reps

Once you are done with the matchup, start the challenge

Learn how to recognize and reward an upset/ cinderella moment

There are going to be 6 rounds in the competition which will run for 6 weeks. So, you need to create 6 competitions for each of the 6 weeks. Remember that this is a single-elimination contest which means there will be the elimination of reps in each of these rounds. This will finally lead to just two reps competing in the final championship round.

Give march madness themed names to each round

Round 2 - Second Round - Here, after the first round’s elimination, 32 players are left and they compete to go to the third round

Round 3 - Sweet 16 - After the elimination in round 2, the participants are bowled down to 16 members and these 16 strive to enter Elite Eight

Round 4 - Elite Eight - In this round, 8 participants are left and compete to reach Final Four

Round 5 - Final Four - This is the round where 4 reps from all the 4 regions compete. From here two of them have to be chosen to participate in the Final Championship.

Round 6 - Championship - This is the ultimate championship contest that happens between two reps. Whoever wins will take home the championship trophy and title.

Once the competitions are live, you can track live scores for each matchup in SmartWinnr’s intuitive leaderboard. Watch your competitions happen in real-time, advance your winners, and advertise an awesome championship incentive. Congratulations - you have run your first March Madness-style sales competition!

The same format of march madness competition used for individual reps can also be used to run a team contest. When you have a globally distributed team, then you could run this contest between various countries, or territories or between the team of different managers

Just like every other challenge, the first step to create a team challenge is to determine the KPI’s that you want to measure.

Once you set the metrics, its time to seed/rank your teams. This seeding or ranking is done based on the past performance of the teams.

Step 3 - Matchup Teams for the Challenge

Now its time to create team match-ups (determine which team competes against which team). This matchup will be done in the same way that we have done for the individual challenge. Consider the seedings of the team and create their matchups.

For example, if you have 8 teams ranked 1 through 8, then pit the top team with the bottom team (Team 1 vs Team 8). And then, the next best team versus the next lowest team (Team 2 vs Team 8) and so on. Here is how the matchup looks:

Learn how to recognize and reward an upset/ cinderella moment

Since we are dealing with 8 teams, let’s have 3 rounds here. These rounds will run for 3 weeks. So, you need to create 3 competitions and give march madness themed names to each of the competitions.

This is a single-elimination contest which means there will be the elimination of teams in each of these competitions finally leading to just two teams competing in the final championship round. There will one team at last which wins and takes away the championship trophy and title.

Once the competitions are live, you can track live scores and progress of each team on SmartWinnr’s live leaderboard. This leaderboard can be accessed anytime and anywhere.

Want to design a March Madness contest for a smaller or larger salesforce?


Searching for free themes for your contest?

Select from ready-made themes like NFL, Olympics and more. Select KPIs, get engaging team names, team logos, and banners to drive a contest that your participants will remember - Contest Theme Generator

If you’re from the Insurance industry, explore how your sales incentive plan can be embedded into increasing productivity, decreasing agent attrition and reducing supervisory cost.

If you’re from Banking, learn about how to increase your upsell and cross-sell revenue, improve customer satisfaction, and motivate your branch and field teams through your incentive plan.

If you’re from the Pharmaceutical industry, integrate your sales incentive plan into a gamified sales contest, focusing on collections, POB, doctor visits, chemist visits and more.

If you’re from the Medical Devices industry, create one incentive plan that covers product knowledge, to handle customer conversations, to programming devices, to sales.

Curious to learn more about it? Book a demo today!